​History of the Lani-Kailua Outdoor Circle​

In May 1948, long before the Pali Tunnels made daily commuting from downtown Honolulu to the Windward side feasible, a small group of women gathered in the sleepy beach town of Kailua (population 3619) to organize the Lani-Kailua Outdoor Circle. More soon joined them and the Circle grew to more than 200 members within a few years.

Photo at the top of this page shows LKOC members working on the Kailua Road median in front of the old Kailua Theater (at right), circa 1950's. 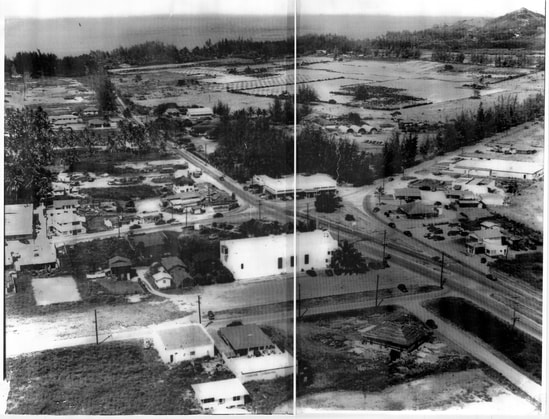 ​By 1950 Kailua had 7,740 residents, with new subdivisions sprouting in Keolu Hills, Kalaheo Hillside, and Enchanted Lake. In 1949, the newly-formed Lani-Kailua Outdoor Circle began planting trees in the Kailua Road median as shown in the photo below. Tecoma trees were planted at the time, but in 1959, a major upgrade to the roadway occurred, and replacement trees, including Kamani, were planted. At that time, LKOC planted dozens of trees on Oneawa, Kainehe, Uluniu, Maluniu, Kihapai, and Hoolai Streets, with crews of LKOC volunteers out digging the holes, planting, and staking the trees. Many of these street trees are still there today, as exemplified by the beautiful elaeodendrons on Maluniu Street. 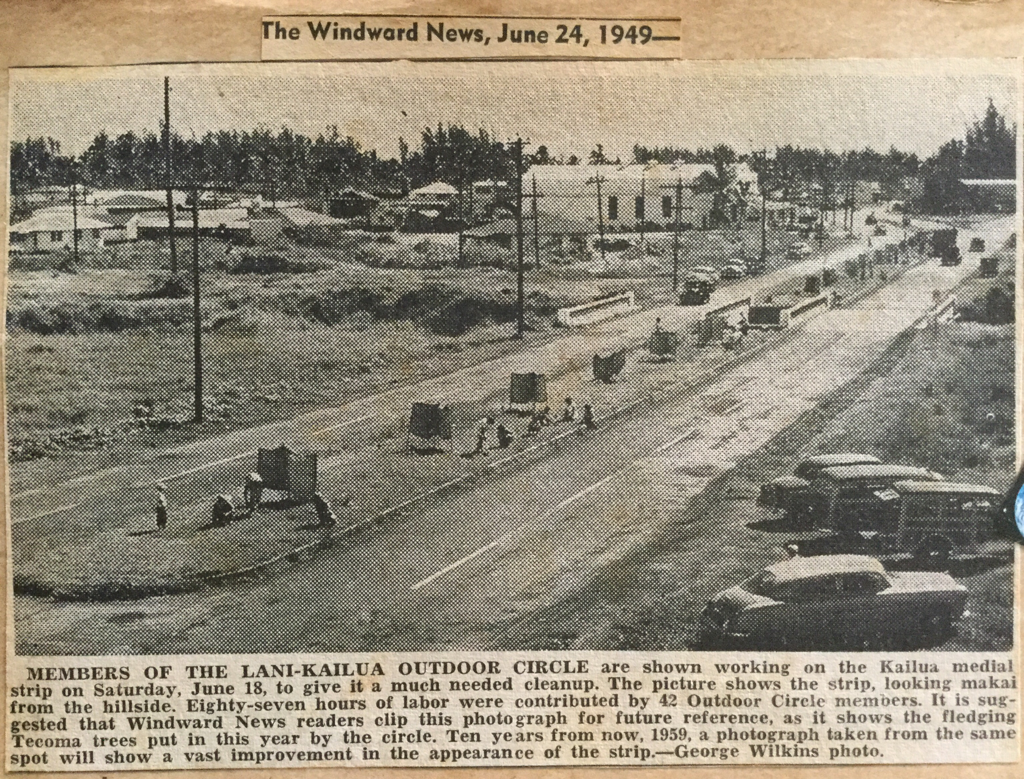 ​Soon the group was instrumental in the landscaping and planting of over 2000 trees at the new schools being built, and along the streets of the new subdivisions and neighborhoods, including Kalama Tract, Bishop Tract (Kailua Estates), Coconut Grove, and Keolu Hills. Below are articles from the Windward Reporter lauding LKOC’s efforts to plant 200 Royal Poinciana trees in the Kailua Heights subdivision, part of the newly developed Enchanted Lake and Keolu Hillside area. 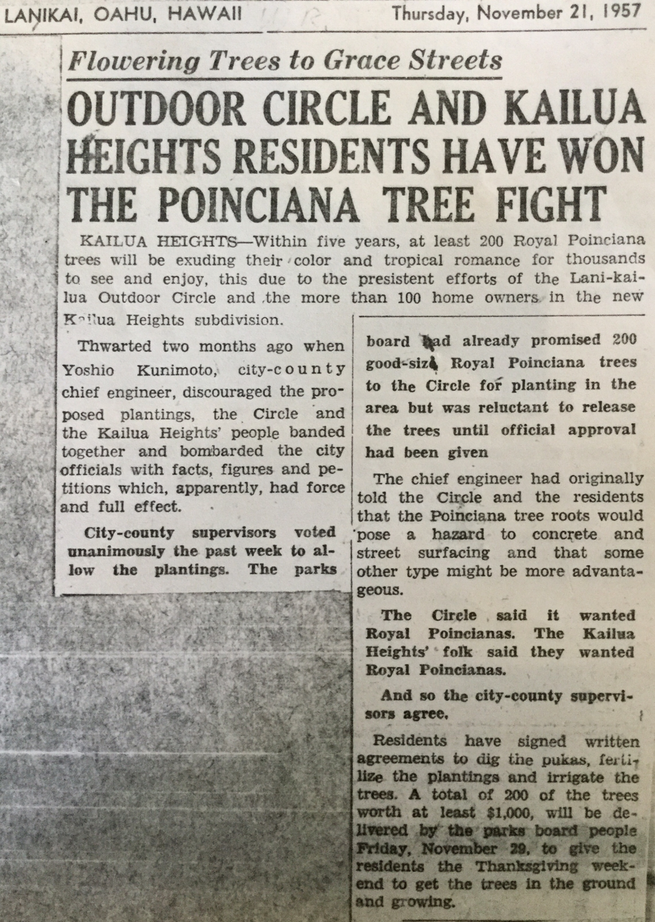 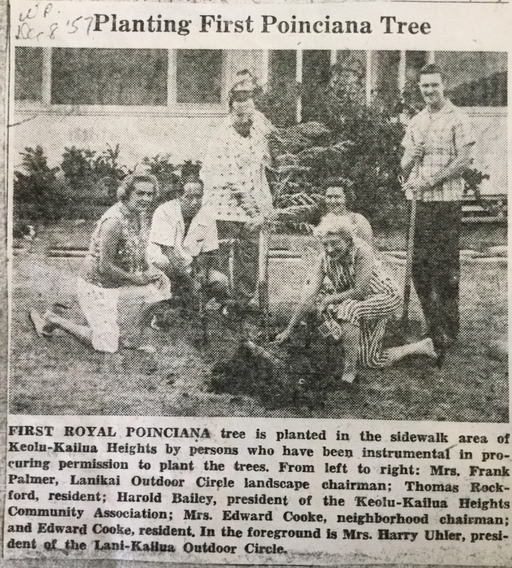 Above article from the Windward Reporter, December 8, 1957
In 1951, LKOC began its now 70-year efforts to preserve Kawainui Marsh and its archeological sites. At that time they petitioned for, and were granted, a permit from the Territory of Hawaii Agriculture and Parks system to clear Ulupo Heiau, as shown in the following news articles at the time. 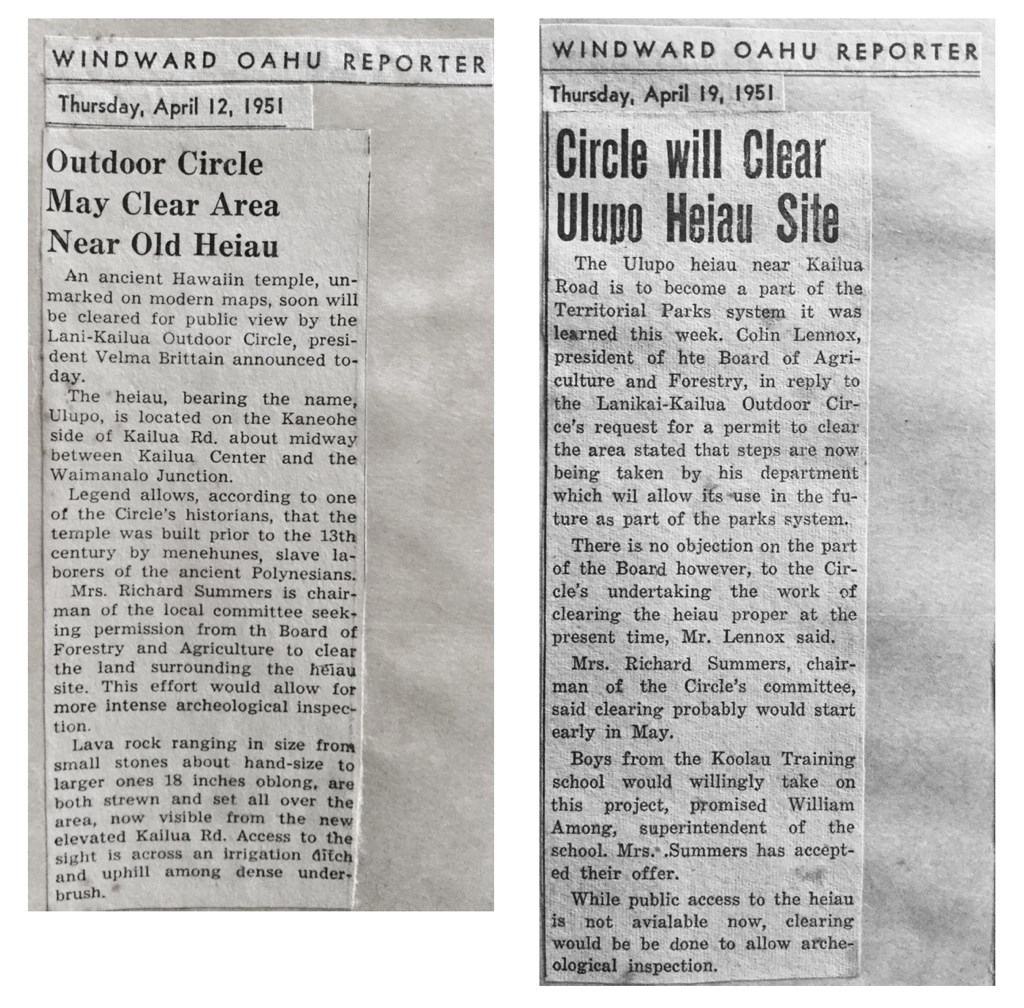 1960-1970
With the tunnels nearing completion, by 1960 Kailua's population had more than tripled to 24,402. Kaneohe Marine Base added another 6,397 to that figure. Our projects included assistance with planting at the newly built Castle Hospital and funds and labor to refurbish the Triangle Parks at Kailua Road and Oneawa Street, Kalapawai, and Lanikai.

We fought open burning at the Kailua dump on Quarry Road. We worked for bike paths to connect Kailua neighborhoods, pushed again for planting of more street trees, and then kept them watered and trimmed.

Kawainui Marsh preservation became an issue and we worked toward this goal. In the early 1960’s, developer Trousedale Construction was planning a residential development in Kawainui Marsh. Our members fought against this and were successful in stopping the development (with the eventual transfer of the land to the City, as described in the following article written in 1973, highlighting our commitment to the stewardship of Kawainui.). Our members spearheaded the eventual formation of the Kawainui Heritage Foundation in 1983. 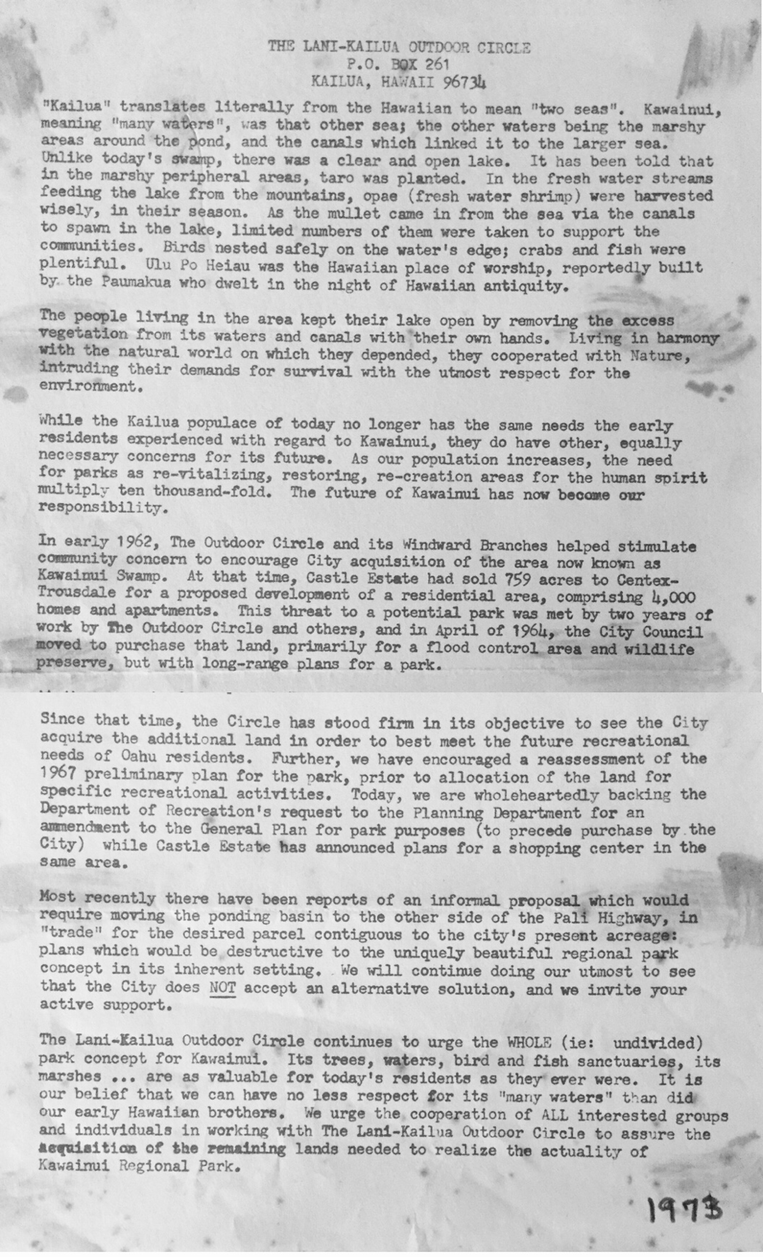 ​Our population of mostly young families was 33,783 in 1970, plus 7,860 more on the Marine Base. LKOC continued working to expand Kailua Beach Park, save Mount Olomana from development on it slopes, landscape the new Kailua post office, remove the Kapaa quarry roadside junkyard, and create height limitations for downtown Kailua.

In 1971, LKOC was successful in lobbying our City, State, and Federal legislators and officials to get trees planted in the median of Mokapu Boulevard, from Kalaheo Avenue to Oneawa Street, an area designated as a federally funded highway, in which median strip tree planting was disallowed. This effort involved LKOC sending numerous letters illiciting support from US Senators Hiram Fong and Daniel Inouye, US Representatives Patsy Mink and Spark Matsunaga, Hawaii Governor John Burns, State Department of Transportation head Fujio Matsuda, Honolulu Mayor Frank Fasi, and US Secretary of Transportation John Volpe.

​This effort resulted in an exception being allowed for Mokapu Boulevard, and today the magnificent trees in that central median, including the extension from Kalaheo Avenue to Kaimalino, are a beautiful testament to the perseverance of our LKOC leaders at the time. 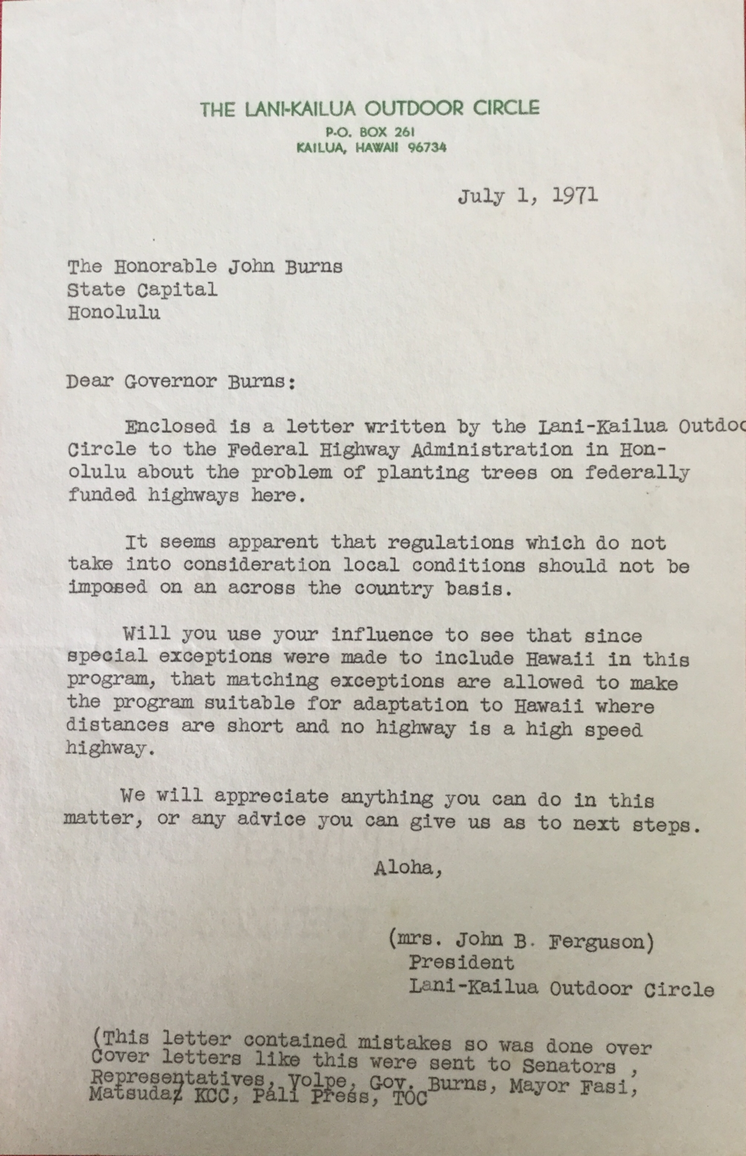 ​In 1980 we had 35,812 residents (plus 11,578 Marines) and we successfully prevented the acquisition of Aikahi Triangle by developers, who wanted to expand the shopping center, and rerouted Mokapu Boulevard to its present position, creating the large tree-shaded park area you see at that corner today. Below is an article that appeared in the Sun Press Newspaper at the time, describing our efforts. 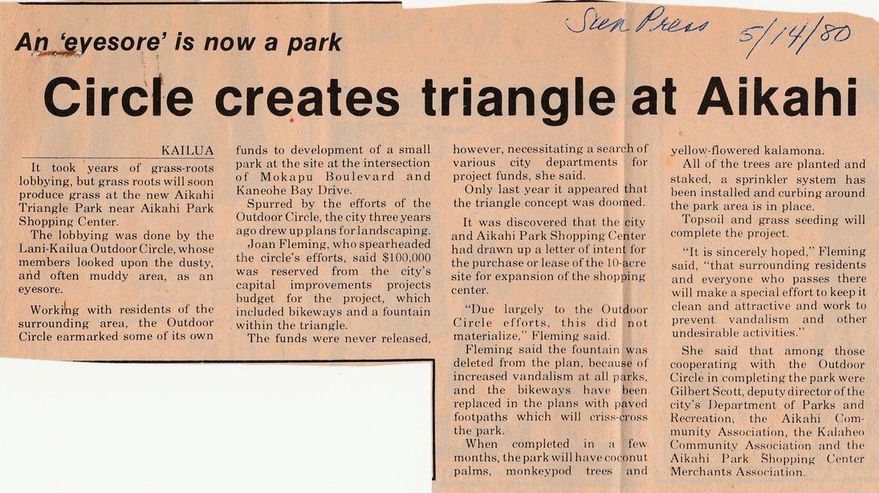 Above: Article in the Windward Sun Press Newspaper about our efforts at the Aikahi Park Triangle 5/14/1980 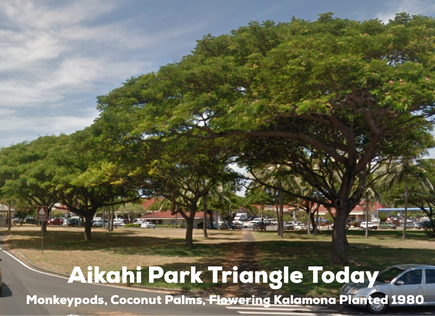 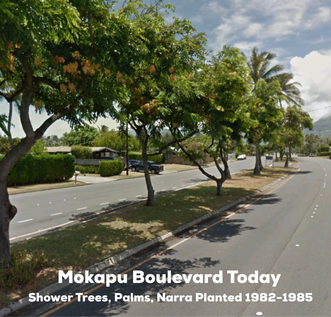 Also in the 1980's we pushed for trees in the medial strip along the entirety of Mokapu Boulevard (shown in the photo at left) and were were successful in facilitating the city's acquisition of the Boettcher Estate/Kalama Beach Park. LKOC currently has adopted Kalama Beach via the City and County's Hoa Paka Program, and we do periodic volunteer maintenance of the grounds and naupaka.  If you are interested in volunteering, visit our Volunteer Opportunities page.
1990-2000

By 1990, Kailua's population had stabilized at 36,818 residents and 11,662 Marines. Our projects included a major landscape project at Alala Point at the entrance to Lanikai, and landscaping of the corridor leading into Kailua town, refurbishment of the Pohakupu fountain and park landscaping, planting of the monkey pod trees at Kailua District Park, protection of Kaiwi Coastline from development, preservation and replanting of trees at Kailua Library, and expansion of Kailua Beach Park to its present area near the boat ramp. The Kailua Christmas "white lights" decorations were begun by LKOC in this period. 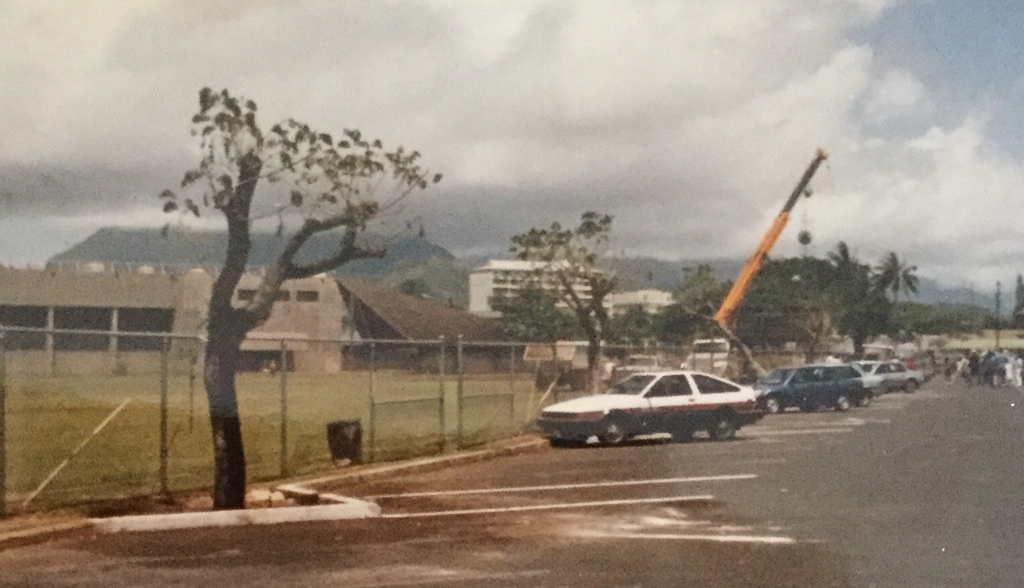 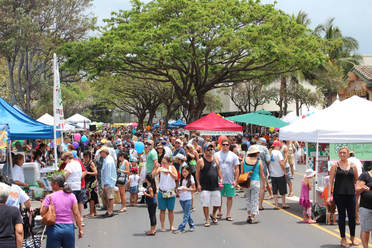 Windward Community College Scholarships
In 1993, as part of our educational outreach goals, LKOC began its scholarship program with Windward Community College. Since then, we have given yearly scholarships totaling over $68,000 to more than 80 students enrolled in Agricultural and Environmental Sciences Programs there. Please visit our WCC Scholarships page for more details on this important program that helps the next stewards of our land and natural resources.

LKOC/WCCC Partnership
We are proud of the horticultural training programs at the Women's Community Correctional Center (WCCC) created by LKOC in 1999, where the women in our "Learning to Grow" program learn skills which will help them find jobs upon release. In return, they maintain some of Kailua's roadsides and parks, thus saving many taxpayer dollars. Please visit our LKOC/WCCC Partnership page and our Volunteer Opportunities page for more details on this life-altering program, and how you can get involved as a volunteer. It is a truly rewarding experience. 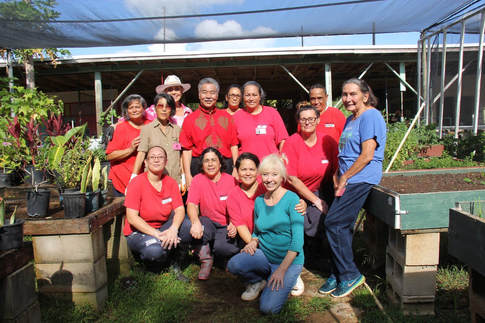 In 2000, Kailua’s population remained stable at 36,513 residents and with 12,000 military personal at MCBH. LKOC continued is planting and landscape maintenance projects within the community.

In the early 2000's, we installed new plants at Kailua Post Office and Hawaiian Tel building on Kuulei Road, and planted silver trumpet trees in the municipal parking lot between Maluniu and Aulike Streets. We replaced the dead Wiliwili trees with shower trees on Mokapu Boulevard in 2007. In 2010, we partnered with the Friends of Kailua Library to refurbish the courtyard. 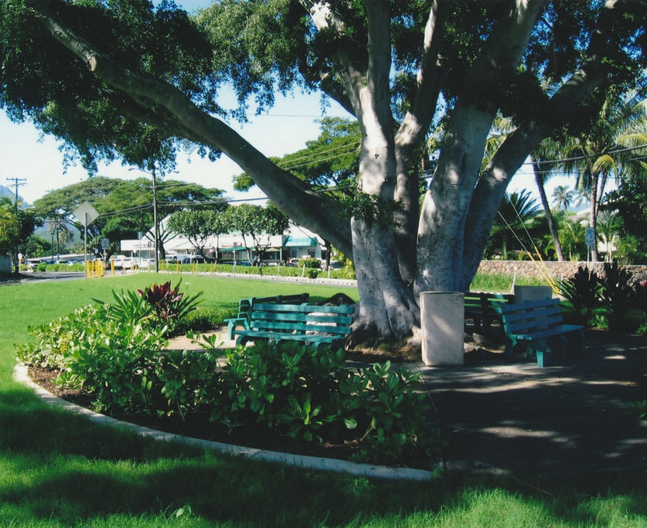 In 2010, Kailua's population was 38,635, with 9517 military personnel. In addition to our tree planting and beautification efforts in Kailua, we continued to advocate for adherence to our State's exemplary sign laws regarding outdoor and aerial commercial advertising, as well as actively advocated for responsible development, limiting commercial activity at our beach parks, and the preservation of the Kawainui/Hamakua Marsh. Please visit our Signs, Public Affairs and Advocacy, and Kawainui Marsh pages for more information about our important efforts here.

​We are proud of our latest landscaping projects at the Pali Palms and Kalapawai Triangles at either end of Kalaheo Avenue, at which we installed the landscaping and have been maintaining for the city since 2010 and 2012 respectively.

Recently, in 2017, we adopted Kalama Beach Park through the city's 'Hoa Paka' program, and do regular volunteer workday maintenance there, involving removal of invasive species, and major landscape trimming, pruning, and cleanup. 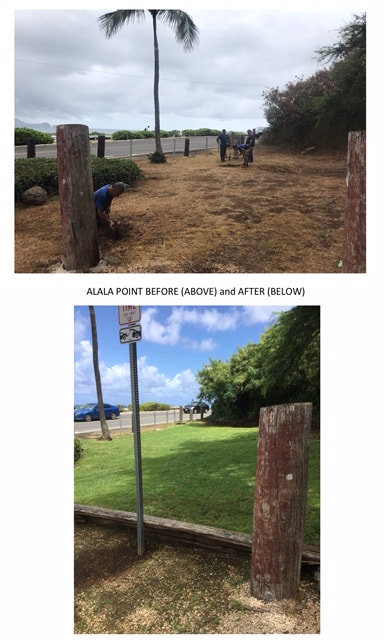 In 2019, LKOC performed a landscape refurbishment of Alala Point, at the entrance to Lanikai. We installed new wax ficus hedges and lawn, as well as upgraded the bollards around the parking lot. As noted above, the original landscaping was installed there by LKOC in 1994, and has been maintained by the “Community Service Workline” from WCCC, under LKOC auspices, since 1999. Photo at left shows a before and after of this recent re-landscaping.

​
​We continue to be actively involved in the maintenance and enhancement of our urban tree canopy through the planting of new trees in our public spaces, as older ones are removed due to age or disease. By working with other like-minded organizations, as well as State, County, and municipal entities, we have made a difference!
Please visit our LKOC Beautification Projects and Tree Preservation pages for more details on our activities in this effort, including a short video as well as a map of site locations.
​

How You Can Help
While ours is a volunteer organization, much of what we do requires major funding. To raise money for these projects, we sponsor the "I Love Kailua" Town Party, which is open to the general public. This event raises funds through our LKOC plant sales, LKOC Town Party t-shirt and button sales, and food vendor sales, as well as raises awareness of beautification and environmental issues in our community. These activities and your contributions in support of our organization are what make it possible to continue our work toward the goal of "Keeping Kailua Clean, Green, and Beautiful."

To join us, or support us, please visit our Join The Circle page!

Please visit our Mahalo page, where we express our thanks and appreciation for all of our generous supporters and sponsors, our dedicated volunteers, and all those who support our mission here in Kailua and on the Windward side! We couldn’t do it without you!
​
LKOC ~ Dedicated to "Keeping Kailua Clean, Green, and Beautiful!" since 1948!