LKOC has been participating in the Kailua Fourth of July Parade since 1949! 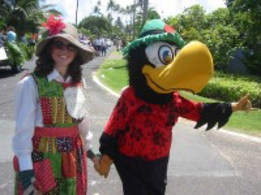 ​
At the annual Kailua Fourth of July Parade in 2017, Lani-Kailua Outdoor Circle showed Kailua we are still working to keep Kailua clean, green and beautiful. Mr. Mynah and Anti Litter marched with us to remind everyone not to litter.
In the 1960’s, The Outdoor Circle started a statewide anti-litter campaign, resulting in the establishment of the first recycling plant on Oahu, on Sand Island in 1967, as well as the establishment of mascots for the program, Mr. Mynah and Anti Litter, created for us by noted local cartoonist Harry Lyons. Now, 50 years later, these two mascots still continue to promote awareness of environmental issues and the importance of trees through our educational outreach and community activities. 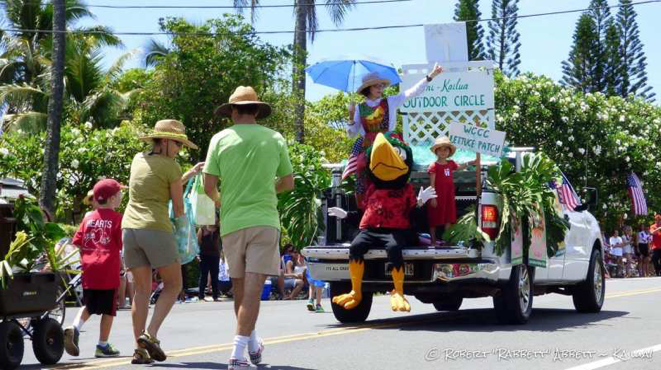 In the float depicted above, we had lettuce seeds from our hydroponic program at The Women's Community Correctional Center (WCCC) to share with residents.
Thanks for all the friendly cheers when we went by! 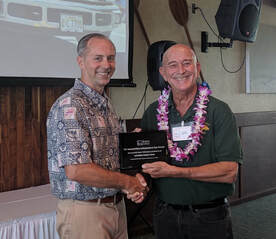 Our LKOC Partnership with WCCC supports the Community Service Workline, who maintain the landscaping at Alala Point at the entrance to Lanikai. In 2018, the women marched with us in the parade, in which our float depicted a replica of the stone marker at Alala Point. Out float won an award for "Best Use of Theme". LKOC Beautification Chair, Steve Mechler, accepted the award from Kailua Chamber of Commerce Vice President Mike Fry.

In 2019, our parade float (shown below) depicted the Kalapawai Triangle Banyan, planted by LKOC in 1954. Over the decades, LKOC has installed and renovated the triangle landscaping several times (in 1970, 1978, and 2010), and continues to maintain the landscaping and irrigation at the triangle, now a rotary, to this day. This is just one of the many planting projects that LKOC has been proud to sponsor over the years. 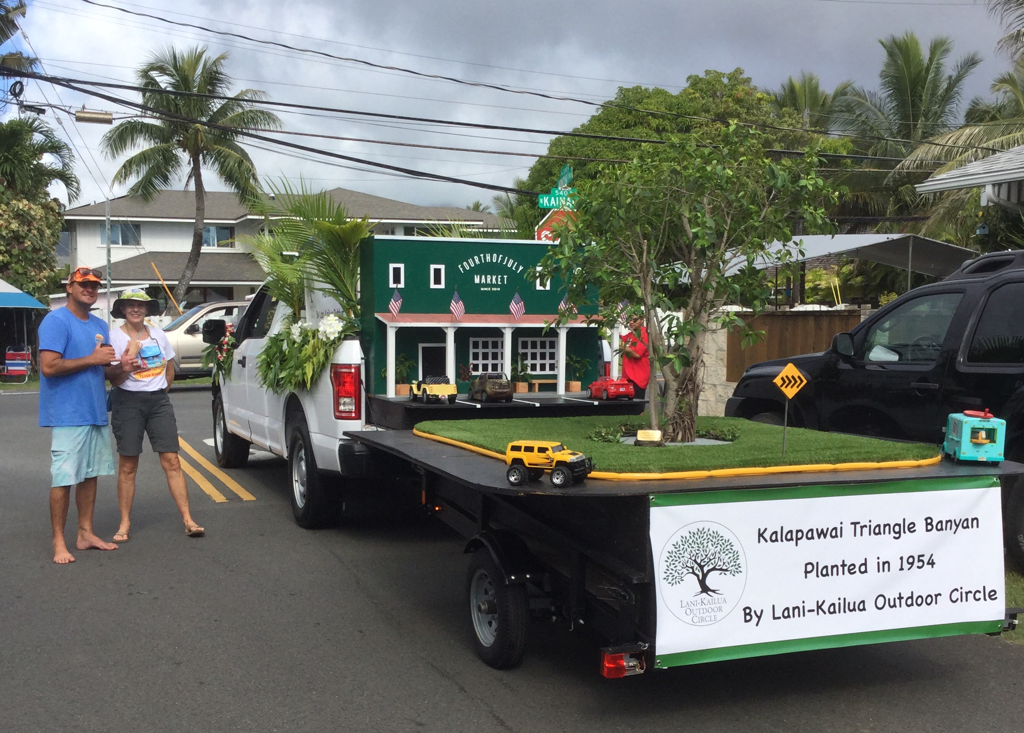 ​In 2007, in partnership with the City and County of Honolulu, Lani-Kailua Outdoor Circle took on the project of replanting the median on Mokapu Road between North Kalaheo Avenue and Marine Corp Base Hawaii. (Note that the mauka portion of Mokapu Boulevard from North Kalaheo Avenue to Oneawa Street is a state road, not under C&C jurisdiction.) The makai median had been planted with wiliwili trees, but those beautiful trees were devastated by the gall wasp introduced to Hawaii. LKOC funded the new trees (over $15,000), and C&C donated use of their equipment and manpower to plant them. Now, shower trees adorn both ends of the planting, and narra trees fill the center sections. We look forward to driving in the shade of these trees as they grow and fill out to create a canopy where the wiliwili trees once stood.

Note also that LKOC has been involved with planting trees along the entire Mokapu Boulevard/Mokapu Road median since 1967!

​
​HOLIDAY HOUSE AND GARDEN TOUR
In December, LKOC hosts its “Holiday House and Garden Tour” for our members, and their families and friends. The event includes self guided tours of 5-6 unique private homes and gardens in Kailua, each festively decorated for the holidays, as well as a luncheon following the tour.

For 2018, our volunteers created lovely wreaths, garlands and baskets as decorations for the luncheon, as shown here. These, as well as unique plants and baked goods and various local crafters’ artwork, were available to purchase.

One of the homes had lovely painted wall art where the home owner had used natural fronds and leaves as the stencil templates, as shown below. If you are interested in duplicating this technique in your own home, click <here> to find instructions on how to do so.

Another lovely home had local artists displaying their artwork, and others had beautiful gardens with eclectic and unique art pieces and plantings, a sampling of which is shown below.